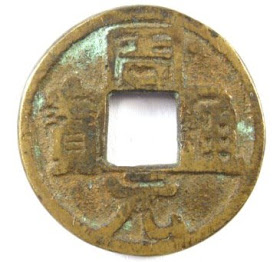 Read the very interesting article about a coin given to the bride on her wedding night in ancient China.
Click here to view the marriage coins given to couple to educate them on what to do during their first night together.
While sex education was not a topic freely discussed in ancient China, it was nevertheless important for newlyweds to have a basic understanding of what they should do on their wedding night in order to fulfill their obligation to family and society to have sons. There were several ways to accomplish this but one method was to provide the bride with a coin which displayed the basic sexual positions.
These marriage coins or charms usually had an innocuous inscription (legend) such as "Wind, Flowers, Snow, Moon" on one side. The reverse side of the coin would depict one, two, or four couples making love in various sexual positions as can be seen on the coin at the left.
The Chinese usually refer to these coins as mixiqian (秘戏钱) which means "secret play" or "secret fun" coins. In English, they are variously referred to as Chinese marriage coins, Chinese love coins, Chinese spring money, Chinese erotic coins, Chinese wedding coins, etc.

As mentioned, these coins are sometimes called "spring" (chun 春) money. This refers to the ancient Chinese springtime ritual, still practiced today by some ethnic minorities, where boys and girls separated by a stream would sing love songs to each other.
The use of the inscription "Wind, Flowers, Snow, Moon" is also consistent with the Chinese esthetic preference to not simply emphasize the sexual act itself. Classical Chinese art likes to also convey the beauty, harmony and natural setting of the action.
It is said that these coins also had another purpose. In addition to being titillating, they were apparently used in brothels where a shy patron, or one not conversant in the local Chinese dialect, could communicate his wishes by simply pointing to the desired sexual activity on the coin.
Source: http://primaltrek.com/marriage.html
Miss Cheah at 6/09/2009 09:38:00 pm