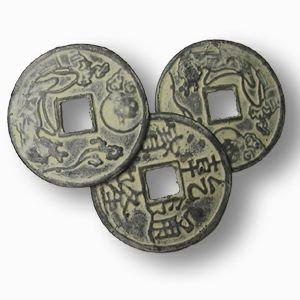 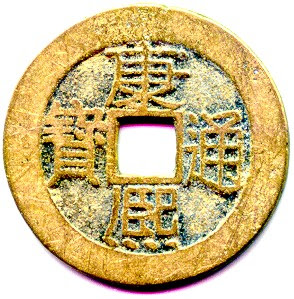 There were five Chinese emperors who ruled when the Qing Dynasty was at its peak period. Their reigns were good and therefore coins minted during those periods were said to carry certain royal auspicious energies within them. Therefore, when we say 5-emperor coins we mean the ancient coins that were used during the reigns of Shun Zhi, Kang Xi, Yong Zheng, Qian Long and Jia Qing. These coins which have gone through millions if not billions of users over more than a hundred years are said to carry with them certain magnetic field energies which have the capability to ward off negative forces.
Of course, we have replicas of these ancient coins but they do not carry the same energies as the ancient ones. And, if the coins were buried in the earth or used for a burial, the effect is even better because they would have absorbed the energy of the earth.
One thing to bear in mind is that coins that have been kept for a very long period of time (say a hundred years) will have Heaven energy. Therefore, coins that have collected Heaven, Earth and Man energies are said to have become very powerful and potent.
One caveat to remember is that ancient coins must be cleaned and sanctified if not they have a likelihood to attract evil beings and instead of getting all the goodness, the reverse could happen to the person(s) bearing them. Why is this so? Because the coins would most probably have changed hands between people with good or bad luck many times and so the bad chi must be cleansed away. If you do get the coins, make sure the wordings are clear, and the coins are genuine. And make sure they are cleansed properly with pomelo leaves and salt (it would be better if sea salt is used). Alternatively, you can use (daun limau purut) kaffir lime leaves. If you can't get them, then try using pomegranate leaves and sea salt. Remember to submerge the coins in dry sea salt and not sea salt solution.
To boost luck, Feng Shui enthusiasts like to place them with wealth enhancers or activators like the Pi Xiu and the 3-legged Money Frog. When used along with these enhancers that are place in auspicious locations, they help to intensify the wealth ushering effect.
It is also believed that when these 5-emperor coins are tied together with a red string, they will give good money luck. If you can't get all five, three would also do and one good way is to put them in a red purse or wallet to attract more money. Why not give it a try? All it takes is a new red wallet or purse and three emperor coins tied in a red string.
You must also remember to use genuine ancient 5-emperor coins (not the replicas) to boost wealth. These coins are said to have the power to intensify fortune luck and act as protective amulets. In olden times, Chinese people would string the coins together and wear them around their necks to ward off negative energies and also evil spirits and maximise their wealth luck. It seems that it also helps to enhance romance luck. So, instead of getting the mandarin ducks and the amethysts, while not go and look for the genuine five emperor coins. They are not too expensive.
For the benefit of those who cannot read Chinese, the first coin is Qia Ching, the second coins are Qian Long, third coin is Yong Zheng, fourth is Shun Zhi and the last is Kang Xi.
Reference: The Auspiciousness in Feng Shui Comic series by the Sage from the High Mountain.
Miss Cheah at 2/13/2008 07:07:00 pm